School Education for Aids-Orphans in Zambia – A SHORT INFORMATION ABOUT WISEKIDS
After the death of Hans Büttner in 2004, member of the German Parliament since 1990, his family (his wife Gerda, his daughter Vera and his son Olaf) and friends in Ingolstadt founded an association to support school education for aids-orphans in Zambia. This was in remembrance of his outstanding engagement for African affairs and special interest in Zambia where he had been living and working from 1979 to 1981. The name “Chaabwe” comes from Luke Chaabwe Natala, a former teacher in Southern Province of Zambia, who made a strong effort in educating children in the rural areas. His daughter, Winnie Natala Chibesakunda, a friend of the Büttner family made efforts to find friends and partners for WISEKIDS in Zambia.

More than 750 000 Aids-Orphans in Zambia
About 20 percent of the 14,5 million inhabitants of Zambia are infected by HIV/Aids. As a result around 90 000 people die per year. More than 750 000 children remain as aids-orphans who either live with relatives, in so called children households or as street kids in the cities. Poverty in Zambia is a big problem – about 60 % of the population live from one Dollar or less a day. Poverty keeps many children away from any education.

School Education as a Chance
WISEKIDS in Germany finances school education for children and youths who became aids- orphans (in double, single or vulnerable status) and cooperates with Secondary  Schools. WISEKIDS pays school fees for the most indigent pupils so that they are able to continue their education and make their finals. Zambia urgently needs teachers, medical doctors, engineers and other qualified specialists, because many professionals are sick or die much too early from aids. Education for young people is a chance for Zambia.

School Education is expensive
Children usually start school with six or seven, but often they can not attend school because of poverty. From 1st to 7th grade they go to primary school, from 8th to 9th grade to basic school or from 8th to 12th grade to secondary school. Primary school is without school fees but there are costs for school uniform, booklets, transport. School fees are demanded at secondary schools. Many of them are boarding schools with additional costs for boarding, altogether about 400 € per year. Actually almost no one can pay school fees for aids-orphans or very poor youngsters, there are too many in each family.

Wisekids pays for about 100 scholarships per year
In May 2006 WISEKIDS started its activities with contacting teachers and pupils in Zambian secondary schools. We work together with boarding schools because we think they know best who is in need. They suggest pupils among those whose school fees are not paid anymore. During the yearly visit members of WISEKIDS together with partners and friends in Zambia verify in very personal interviews the situation of every pupil. In 2007 we supported 63 pupils and 93 in 2008.  In 2009 we supported already 103 scholars. 2010 we gave out 118 scholarships. 2011 we had 98 scholars and in 2012 we gave 120 scholarships. In 2013 we paid for 116 scholarships and in 2014 we supported 98 pupils. In 2015 we supported 101 and in 2016 more than 110 boys and girls.

2017 we have 78 pupils, among them 22 young orphaned and poverty-stricken adults attending the Vocational Training Centre in Chikupi. Especially we support 12 young women in tailoring-courses to give them a chance for earning some money.

From 2007 until 2019 we gave out 1296 yearly scholarships and meanwhile more than 500 scholars finished school after 12th grade or at VTC Chikupi.
The support of our association is quite unique in Zambia, because we give scholarships to poor and orphaned pupils mostly for the rest of their school years they have to attend. That means that we only take as many scholars into our support program as we possibly can guarantee to pay for their whole school time. Many supporters in Zambia pay only for one school term (3 months!) and let the pupils alone afterwards. We want to give security and confidence – that means, we help them to help themselves one day.

Our Partnerschools 2019
Momentarily we work together very intensely with four schools in Zambia:

Chongwe Secondary School in Chongwe 40 km east of Lusaka; in 2018/19 we renewed further support with 20 girls per year; additionally we gave money (about 45 500 €) to build two hostels for girls at the school campus to give them safety and shelter.

Rusangu Secondary School, south of Monze; 15 pupils ; among them since some years differently abled pupils

Monze Boarding Secondary School, Monze, ca. 150 km south Lusaka; 35 pupils; in 2018/19 we gave money for a school garden and a chicken house; renewing of water supply for boys and girls was mainly done in 2017; extras in Monze are mainly financed through donations of Reuchlin Gymnasium Ingolstadt.

Chikupi Vocational Training Center, south between Lusaka and Kafue; 16 students - among them 15 young women and one young man in tailoring courses; since 2017 we also finance the teacher´s salary and her qualification for level 1 teaching.

For about 40 to 50 Euros per month a pupil can attend a state or church carried boarding school in Zambia and with extra funding we can sometimes buy most necessary things like soap, tooth paste, clothes, school uniforms, shoes and so on.

At Monze Secondary School we renewed the water system for boys and girls hostels with extra-donations from Reuchlin Gymnasium Ingolstadt.

At Chongwe Secondary School we financed two hostels for about 120 girls to give them safety and better chances for learning.

All the member fees of the association and all the donations to the association in Germany go in full amount to the school fees and necessary supplies for our scholars.  Please help us to help aids-orphans and very poor pupils to attend school in Zambia. 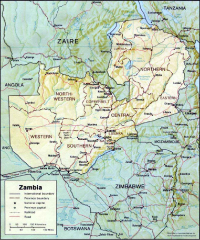 Map of Zambia – our partner schools are in Kasisi and Chongwe east of Lusaka and Kafue, Monze and Rusangu south of Lusaka. 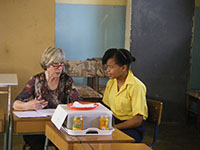 With all our WISEKIDS scholars we have personal interviews to get to know more about their situation. 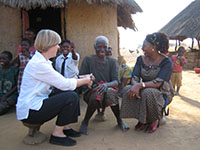 Many aids orphans live with their grandmothers who try to pay school fees as long as possible, but Twambo's grandma cannot afford it any longer; she was on our programme and finished school in 2009. 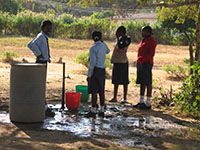 In many Zambian schools water supply is a problem – there is much to do.

At Monze Secondary we could renew the water system with donations from Reuchlin Gymnasium Ingolstadt.